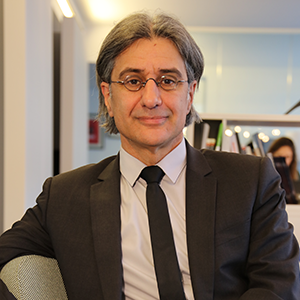 Albert Asséraf was born in 1961. He holds a Master’s degree in Information Science and Technology (1984) and began his career in 1985 with Comecon, an outdoor advertising consultancy firm. He then moved to Carat Comecon Affichage where he was appointed Director of Research & Tools in 1990. In 1993, he became General Manager of Carat Expert Affichage.

From 2004 to 2016 Albert Asséraf held the position of Executive Vice-President, Strategy, Research & Marketing of JCDecaux France.

In January 2017 he was named Executive Vice-President, Strategy, Data & User Innovation, responsible for implementing the company’s open innovation strategy and initiating all areas relating to the data strategy. As a keen observer of new trends, Albert Asséraf helps to develop a range of enhanced offers and services that will anchor JCDecaux durably and effectively in the smart city world.

He is a member of the Boards of Directors of CESP (Centre d’Etude des Supports de Publicité) and IREP (Institut de Recherches et d’Etudes Publicitaires).

He was an Associate Professor at Paris 13 University, and also taught in the Marketing, Advertising and Communications Department of the CELSA School of Information and Communication Science Paris Sorbonne. He now teaches at Paris-Dauphine University, in the Telecom and Media Management Master.

Albert Asséraf is a member of the French Executive Committee and the French Management Committee.