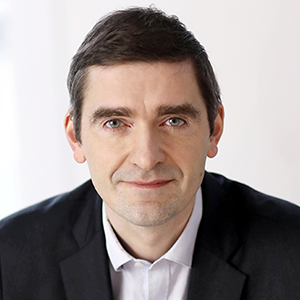 Arnaud Vamparys, 49 years old, a graduate of the École Polytechnique and the École Nationale Supérieure des Télécommunications (X-Mines), joined the Group in 1995 to work since in a number of positions in France, in the Netherlands and in Spain, within the mobile, internet and business markets.

As chief of engineering of Dutchtone, he built a new mobile network in the Netherlands between 1998 and 2000. From 2000 to 2003, he was CTIO for Spanish ISP Wanadoo which became number two on his market after Terra (Telefonica). From 2003 to 2007, he was the VP Products and Services Development for Orange Business Services (France Telecom, Transpac and Equant) creating the Orange Business Livebox a new multimedia router product line used today by more than 75% of the French business sites.

His next position was Orange Labs Mass Market VP and in charge of the group historical R&D site of Issy-Les-Moulineaux near Paris.

Arnaud Vamparys has been working three years between 2011 and 2014 as “Seamless Wireless Access” Group Strategic Program Director for Orange executive committee. Inside Conquest 2015, the strategic program objective was to become leader in mobile internet customer experience for Europe and Middle East Africa.

Since 2014, Arnaud Vamparys is our Senior Vice President for Radio Networks inside Orange. He is as well our 5G group champion since October 2017 coordinating different customer value creation initiatives on this new mobile network generation.