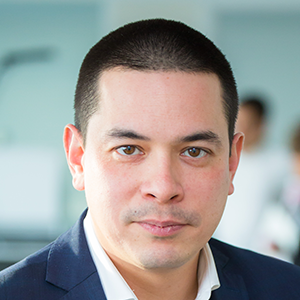 A graduate of France’s Ecole Normale Supérieure, Aymeril Hoang has an Agrégation in Economics and Management, a Masters in Public Finance Law (Paris II) and a B.A. in Econometrics (Paris I). He joined ARCEP (the French telecom regulatory authority) in 1999 and the Ministry of the Economy’s DGCCRF (general directorate for competition) in 2003 to work on opening up the telecom sector to competition. Between 2005 and 2008, he headed the digital team at the French Trade Office in San Francisco and accompanied close to 80 French start-ups. In 2009, he joined the French Embassy in Washington DC as advisor in innovation and new technologies. In 2010, he became COO of an Internet start-up in property services. In 2012, he was appointed Innovation, Digital and Attractiveness Advisor to the French Minister for Small Businesses, Innovation and the Digital Economy, where he steered the “French Tech” initiative. Since September 2014, Aymeril has joined Societe Generale as Head of Innovation for the Group.