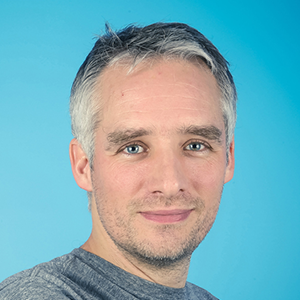 Prior to that, he was a game designer at Kalisto Entertainment, contributing to the development of “Superfarm” and “The Fifth Element”.

Recognized for his creativity, David is a graduate of the École Supérieure de Réalisation Audiovisuelle, and over the course of 15 years has made Asobo Studio the leading independent creator of console and computer games in France.

Among other things, he was the head of artistic development for four adaptations of mythical films from Pixar Animation Studios: “Toy Story 3”, “Ratatouille”, “Up” and “WALL•E”

From 2007 to 2009, he was also at the creative helm for the creation of “FUEL”, the legendary racing game that holds the Guinness world record for the largest playable area in a console game.

In 2012, on behalf of Microsoft, David and his team created the first game that allows gamers to scan themselves using the Kinect sensor, and to project themselves into the heart of the action in “Kinect Heroes/Kinect Rush: a Disney-Pixar adventure”. The studio continued its development with the release of Monopoly Family Fun Pack (PS4, PS3, Xbox One, Xbox 360) for Ubisoft, and The Crew (Xbox 360).

David then went on to head up the development of the first two holographic games in history – HoloLens: Fragments and Young Conker – working closely with the Microsoft teams. He is currently deeply involved in developing two new original, as yet unannounced, IP for the studio.