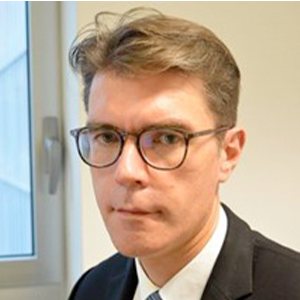 Director of “Mobile and Innovation” department

A graduate of the Ecole Polytechnique and the Ecole nationale supérieure des télécommunications, with a DEA (Advanced studies degree) in industrial economics from Université Paris Dauphine, Franck Tarrier began his career in 2002 as Deputy head of the office of Communications networks and technologies in the Ministry of Culture’s Media development department.

In 2006, he joined the National Research Agency (ANR) as a policy officer. In 2009 he became the head of the Directorate General for Competitiveness, Industry and Services’ (DGCIS) “Software” office. Between 2012 and 2016, he served as the Deputy regional director and head of the “Enterprise, employment and economics” division of the Ile-de-France Regional Directorate of Enterprise, Competition, Consumer Affairs, Labour and Employment (Direccte).

Then in 2017 he joined the Directorate General for Enterprise (DGE) as the Deputy Director of “Transport equipment, mechanics and energy”.

Franck Tarrier has been appointed Director of Arcep’s “Mobile and Innovation” department on December 1st, 2021.