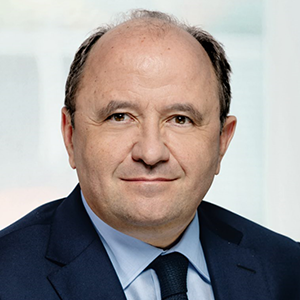 Jérôme Nanty, 58 years old, is a graduate of Institut d’études politiques de Paris and has a Master’s degree in public law.

He began his career at Société Générale, before joining Crédit Lyonnais’ Financial Markets Department in 1989 as a public debt operator and then head of a bond issuer portfolio. In 1998, he joined the Human Resources Department as head of employment policy and then labour relations. From 2001 to 2004, he was Director of Labour Relations for the Crédit Lyonnais group. At the same time, he has held the same positions for the Crédit Agricole group since 2003. He became Human Resources Director of Crédit Lyonnais (later LCL) in 2005.

He joined the Caisse des Dépôts group in 2007 as Group Human Resources Director. In December 2012 he was appointed Secretary General of the Transdev Group. In this capacity, he is also Chairman of the Supervisory Board of SNCM. In July 2016, he joined Air France KLM as Deputy Managing Director in charge of the General Secretariat, the Group’s Human Resources Department and Transformation Management.

Jérôme Nanty joined Carrefour in October 2017 as Group and France Executive Vice President Human Resources. Since July 1, 2019, he has also been in charge of the Real Estate Function.