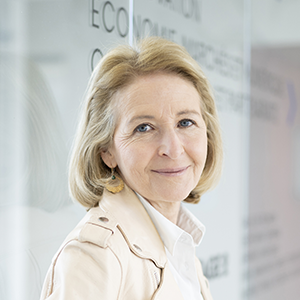 Laure de La Raudière, 54, is a Member of French Parliament for the 3rd constituency of Eure-et-Loir, since june 2007. She is Vice President to the Center-Right political party, “AGIR”.

Rapporteur for several laws or studies on digital issues for the past 12 years, she is widely engaged on legal, social and economic issues of digital sector (broadband network and FTTH development all over the country, net neutrality, innovation and digital economy development, “Internet of things” economy, cybersecurity, Blockchain, education, social inclusion…).

Graduated at Ecole Normale Superieure and Telecom Paris Tech, engineer in telecommunications, Laure de La Raudière spent her career in the private sector before her election in the Assemblee Nationale. After 12 years at France Telecom Orange, until 2001, she was partner in a start-up in AI Software, Pertinence data intelligence (2001-2002). In 2003, she decided to start a business “Madisy Conseil”, that merged with “Navigacom” in 2006, two IT consulting companies.

She was also Mayor of Saint-Denis-des-Puits (Eure-et-Loir) until June 2017, where she lives and where is her constituency.