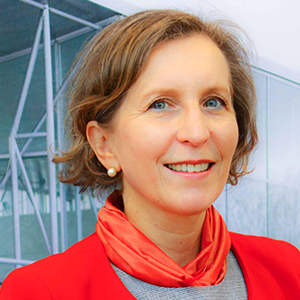 “Digital solutions for the care of elderly populations will be a driving force, not just in the development of eHealth markets, but in the overall evolution of healthcare systems. Most notably, digital healthcare will enable us to expand beyond the current “cure” paradigm, and to offer new services around prevention and accompaniment throughout the entire citizen lifecycle.  ”

In her role, Nadia leads Orange Healthcare’s activities in the Home Care and Senior Independence markets, with the objective of identifying opportunities where the Orange can position itself as a leading provider of telemedicine and remote home care services. Prior to her current role and responsibilities, she led service and product marketing efforts within Orange Healthcare.

Nadia began her career within the Information System Directorate of the French Ministry of the Interior where she was responsible for the computerized management of administrative assets (national identity cards, visas, driving permits, etc).  She later directed new IT infrastructure deployments nationally for the French Police force and Prefectures.

Nadia is a graduate of the École Polytechnique (Paris) and the École Nationale Supérieure des Télécommunications (Paris) and was previously a Senior Civil Engineer of the Corps des Mines in France.