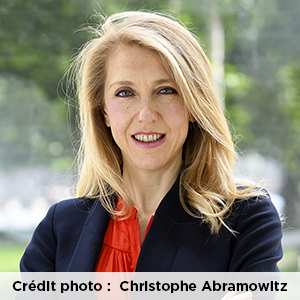 A graduate of Sciences Po Paris (1999) and of the Paris III University with a Master in European Policies (DEA Politiques européennes, 2000), Sibyle Veil joined the Council of State (Conseil d’Etat) in 2004 after having attended the Ecole Nationale d’Administration (2004, Léopold Sédar Senghor Promotion). She was promoted State Councillor (conseillère d’état) in 2019.
In June 2007, she was appointed advisor in charge of social affairs to the President of the French Republic.
In November 2010, she joined the Executive Board of the Paris Hospital Group (Assistance publique – Hôpitaux de Paris) as Director in charge of steering the transformation of the group.
In 2015, she joined Radio France as Director of Finance and Operations.
On 12 April 2018, she was elected chief executive officer of Radio France by the French Media Authority (Conseil supérieur de l’audiovisuel).