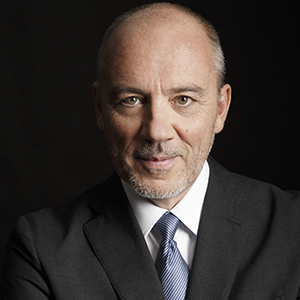 Stéphane Richard has been the Chairman and Chief Executive Officer of Orange since 2011, one of the largest operators of mobile and internet services in Europe and Africa. Since 2019, he has taken on several international engagements; as Chair of the Board of the GSMA, the worldwide mobile operators association, and as a Commissioner of the United Nations Broadband Commission.

Between 1992 and 2007, Stéphane Richard held successively different executive positions at several of the largest French companies : as deputy CFO of Compagnie Générale des Eaux, CEO of Compagnie Immobilière Phénix, Chairman of CGIS (now Nexity); then in 2007 as deputy CEO of Veolia Environment and CEO of Veolia Transport, as well as being a member of Orange’s board.

From 2007 to 2009, Stéphane Richard was appointed Chief of Staff to the French Minister for the Economy, Industry, and Employment. He joined the Orange Group in September 2009 and has successively held the positions of Deputy CEO in charge of French Operations, CEO Delegate, and CEO.

Stéphane Richard is a French national, born in 1961. He is a graduate of HEC – École des Hautes Études Commerciales  and ENA – École Nationale d’Administration.