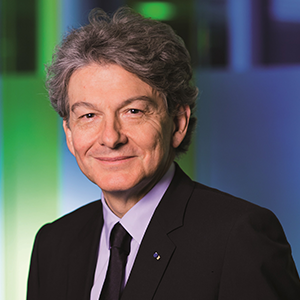 Since 2008, Thierry Breton is Chairman and CEO of Atos, a global leader in digital transformation with approximately 120,000 employees in 73 countries and annual revenue of more than € 13 billion. He has led the transformation of the Atos Group to create a new global IT champion, notably through several acquisitions.

In his career Thierry Breton has held a number of senior positions in business, politics and academia, such as professor at Harvard Business School, France’s Minister for Economy, Finance and Industry, chairman and CEO of France Telecom and Thomson. Thierry Breton began his career as an entrepreneur in New York, where he created IT engineering company “Forma Systems”.